What Could You Achieve ... If You Weren't Bogged Down by COBRA?

Five things to know about COBRA and the Opioid Epidemic 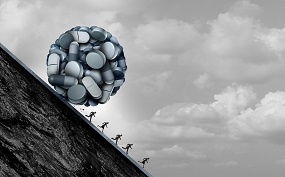 A sad and scary reality is sweeping our country. Drug addiction has skyrocketed. Drug overdoses are now the leading cause of death among Americans under the age of 50. According to the United States Department of Health and Human Services (HHS), in 2015, 12.5 million Americans misused prescription opioids, 828,000 people used heroin and 33,091 people died from overdosing on opioids. In late October of 2017, the Trump administration declared the opioid epidemic a public health emergency.

With such a widespread problem, most employers will likely deal with an employee, spouse or dependent who falls victim to opioid addiction. Unfortunately, the addiction may cause individuals to lose their jobs, face divorce, or, sadly, even result in death. These events, when coupled with a loss of health coverage, constitute COBRA qualifying events. The opioid epidemic adds some unique twists to COBRA administration. Below are five things you should know to properly administer COBRA in these tough times.

1. Incapacitation may warrant extension of the 60-day COBRA election period.

Health insurance is a key factor in the treatment of addiction. An individual who loses his or her job as a consequence of addiction is very likely to miss important deadlines such as the deadline to elect continuation of health insurance.

Whether or not an individual is incapacitated is a factual determination. Plan administrators should be aware of the possibility that circumstances surrounding drug addiction and overdose may lead to equitable tolling of the 60-day COBRA election period.

2. Others may elect COBRA on behalf of a qualified beneficiary.

Plan Administrators would be wise to accept COBRA elections made by third parties who are not officially designated as legal representatives. The COBRA rules do not say who must complete the election form. In fact, the COBRA rules do not even require a written election. No one is prejudiced by the third-party election, and therefore, in most cases courts will uphold the election.

3. Third parties may pay for COBRA on behalf of a qualified beneficiary.

Under the law, any third party may pay for COBRA coverage including hospitals and employers.  The statute and regulations do not specify who must make the payment. Instead, the IRS preamble to the COBRA regulations (which is not official law but provides an official interpretation of the law) clarifies that plan administrators must accept a timely COBRA premium on behalf of a qualified beneficiary regardless of who actually makes the payment.


HHS recently clarified that HIPAA privacy rules allow for flexibility during this dangerous epidemic by releasing a fact sheet on the subject. Some Plan Administrators may be hesitant to discuss COBRA details including coverage and premium amounts with persons other than the qualified beneficiary. HHS clarifies that HIPAA allows sharing health information with family and close friends who are involved in care of the patient if it is determined that doing so is in the best interests of an incapacitated or unconscious individual and the information shared is directly related to the family or friend’s involvement in the patient’s health care or payment of care. For example, a plan administrator may use professional judgment to talk to a third party of someone incapacitated by an opioid overdose about COBRA coverage available and payment for that coverage.

COBRA is not required when a termination of employment is due to gross misconduct. The subject of this article is drug abuse. This begs the question … does drug use outside of work constitute gross misconduct? The COBRA statutes and regulations do not define gross misconduct. Court interpretations of the term vary significantly. Unless you have a clearly written policy that is included in your plan documents and is adequately communicated to employees, you are rolling the dice by denying COBRA based on gross misconduct.

As you can see, the opioid epidemic impacts all of us. Make sure to educate your HR team and company leaders on the workplace implications.

This article was reprinted from the December 2017 issue of Health Insurance Underwriter Magazine featuring our very own Robert Meyers.